Karin Rehnqvist is one of Sweden’s best known and most widely performed composers. From chamber music to orchestral, stage and vocal works, she has blazed a unique cross-genre trail, exploring the borderland between art and folk music, and evolving a highly distinctive compositional and performance style.

One of her signature motifs is the extraordinary vocal technique of Kulning, the ancient call of Nordic herding girls to drive in their flocks.

A restless innovator, her repertoire is marked by an uncompromising invention, raw emotional power and the icy shock of the new.

Karin Rehnqvist has 2009 been appointed Professor of Composition at the Royal College of Music in Stockholm. This makes her the first woman to hold a chair in composition in Sweden. 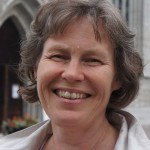