I was born 1972 in northern Iraq, in Iraqian Kurdistan. I have lived in Sweden since 1990. I am an educated musician, artist and documentary film maker. Since 1996 I have been working with film and film cutting. During the years I have produced quite a few films, both documentary and fiction. Film is inspiring to me, since it is a media where all forms of art can meet. 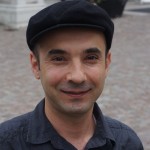