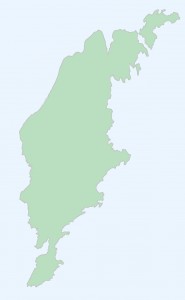 The island of Gotland, in the Baltic Sea, probably has the world’s greatest density of churches, of which around one hundred are of medieval origin. Most churches have one or two bells, some have three or more.

A Very Large Concert will use all the church bells in the island, well over 200, as if they were one instrument, presumably the world’s largest. The musical tone of every bell have been meticulously measured and different ways of playing on them has been practiced.

On June 8th, 2013, all the bells will perform together as a single musical instrument, most likely the world’s largest ever, in a concert specially written by prominent Swedish composers for this special occasion. More than 100 ringers will participate, together with approx. 150 volunteers, and a staff of technicians.

The sound will be recorded and transmitted by smart phones, using the 4G network, to a hub at Radio Sweden, were all the bells will be mixed and broadcast live over Sweden and Europe, and via Internet to the rest of the world.

An accompanying documentary film will be produced by a Swedish film-maker, and presented to Swedish Television.

Map of the medieval churches in Gotland ›